…not precisely Shakespeare I know, but let us try to ask this question.

Why doesn’t the USA hold a
National Referendum
on the 2nd amendment?

The gun debate continues to rage, with both sides of the argument using a variety of views to justify their stance on gun ownership. It also needs to be clear that both sides make compelling arguments that demand serious consideration. Perhaps the public should answer the question of whether it is a right to own a firearm or not.

Political figures are either pro-gun or anti-gun, but while everyone screams different arguments, nobody is taking the simple question and putting it on display.

And why would they?

Think about your position of the debate and see whom you supported because of that, and then look at the same politician’s public policies and tell me if you still agree. Some people will find that their stance on whom they support, rested on an argument of whether it is a right to own a firearm but found the public policies to be shocking.

And oh boy, is it media on board with this debate. Shocking news stories that inspire fear or anger is an excellent way to attract attention

So why not let the public decide? Put forward a vote…

Should people have the right to own a gun?

Let us say we removed guns?

….the pro-gun side ask: “Well what about the guns acquired or owned illegally?”

Everybody agrees that illegally owned weapons should be considered a serious crime.  The problem is that it is not considered one.

In the US, it is a precise statistic that the vast majority of mass shootings take place with the use of a handgun.

Nevertheless, the average maximum penalty of the US for owning an unlicensed weapon is only 3.5 years, except for New York, where their laws state :

Possess loaded firearm without permit, outside of person’s home or place of business: class C felony, classified as violent felony offense, punishable by up to 15 years imprisonment, with a mandatory minimum of 3.5 years
(Source)

So obviously, for some violent individuals, it is not that frightening to risk three and a half years in prison.

Owning an unlicensed weapon should be a severe crime that should carry a very hefty punishment. Some might argue that this can be applied, but others might feel that it is not good enough. Either way, it would undoubtedly be a better stance at adding deterrents of obtaining illegal firearms. The risk of a mandatory long term sentence would undoubtedly make many individuals think twice about even acquiring the gun illegally, let alone attempting a violent action.

So then we keep the guns, right?

…hold on, should all guns be ok?

Well, the gun is useless without bullets. So why not place a cap on how many bullets certain guns owners can own.

This being defined by how much one gun can hold with being fully loaded.

You don’t need more than one magazine to protect yourself. Having enough to fire some warning shots and some for the possibility of an actual need for self-defence arising should be enough. 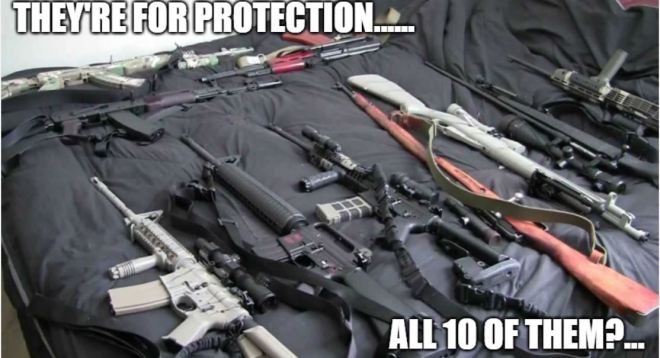 So do you agree that that the public should decide, once and for all?

Should people still have the right to own a gun?

Let us know what you think in the comments below.