Boris needs an Election, Jeremy has conditions, and the EU won’t grant an extension until they see satisfying movement in the UK’s Parliament.

The 31st of October…

…will just be Halloween in the UK.

Boris Johnson’s insistence for a Brexit on the 31st of October is not happening. For weeks we have heard him scream that he insists on the UK being out of the EU by no later than the 31st of October or “rather be dead in a ditch”. But he’s not dead, and he isn’t in a ditch, in fact, now the push is for an election. 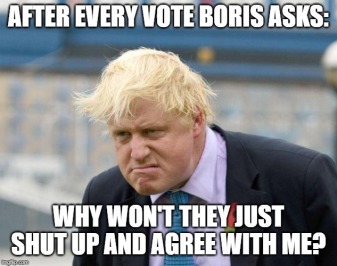 Being in government but not the majority is quite possibly one of the most stagnant forms of a parliament.

And if that wasn’t enough, Boris is always under a little extra scrutiny with him being embroiled in scandals such as the speculated affair with Jennifer Arcuri or the allegations of his misuse of public funds. As well as the suggestions that all this insistence on getting Brexit done is just to help him and his precious friends get even more rich. As it stands, the Labour party acts like it is stepping in his way, but not strong enough to change the government’s intended course of action. Which is why he is pushing for a general election on the 12th of December. The reason, of course, is simple; to attempt to gain the majority once more and be able to move Brexit forward. So why hasn’t this happened yet?

Boris would only need 1 of the following 3 :

Saturday evening held our latest plot twist though as the Liberal Democrats(Lib Dems) and the Scottish National Party(SNP) have suddenly put forward terms for their support to Boris’s next motion for a general election. The terms include the EU granting the extension till January,  and if it was separated from Brexit legislation. This could spell trouble for Corbyn and the polls reflect this…

It can be argued that the only reason that Theresa May’s weak government wasted 3 years to deliver no actual results is because of an even weaker opposition. Jeremy Corbyn has shifted position on so many issues that some of his own party members don’t trust that he would be the right person to stand for a general election.

Currently, it is whispered among some of his MPs that he is seen as a LINO, Leader In Name Only.

Between the antisemitism scandals by some of his party members and having the worst poll rating in nearly 40 years, several of his MP’s don’t want to go to an election as they feel he will be more of an anchor than a winning leader.

A poll carried out by Opinium Research from Wednesday to Friday showed support for the conservative party had reached 40% while the labour party had only 24%. It has been pointed out that the Labour party would like to avoid an election because MPs actually fear that they will lose their seats.

So the question from many to the Labour Party is, why are you sticking with Jeremy Corbyn?

The State of the Union

Scotland also wants out of a union…

With the now near-certain fate of the UK leaving the EU, Scotland is resorting to calling for a second referendum that would see Scotland take independence to re-enter the European Union.

First Minister Nicola Sturgeon is to address a pro-independence rally in Glasgow on the 2nd of November. This will be the first time that she has attended such an event and has previously tweeted a video in which she states that Scotland values the EU citizens that live there and that the Scottish Government will do everything in its power to “help them stay.”

As it currently stands though, Nicola Sturgeon requires two things to bring this about.

She also needs Brexit to actually happen to gain the momentum she needs from the public.

As it stood last week, polls showed that a desire for independence had grown to 50%.

“Whether you have lived here for months or many years, Scotland is your home, you are welcome here, and we want you to stay.”

In Conclusion…what do we expect to happen?

Boris Johnson could claim that his government are merely following the will of the people. However, it would seem that he is actually spearheading the dissolution of the United Kingdom.

At the moment, there lies a stalemate as Brussells have said that they do not expect to have an answer on the Brexit extension until Tuesday. So Monday’s session could be met with one of two outcomes.

I expect he’ll say something along the lines of, “I struck a deal that Parliament wouldn’t allow through and the EU didn’t help. But I got us out of the European Union didn’t I.“